Robert Barnes founder of Lisa’s Fund handed over another cheque for £7,500 to the Arthur Rank Hospice Charity recently. The new hospice is truly magnificent said Robert, our first inpatients are due to arrive around the 11th November so its all very exciting right now.

Lisa’s Fund has had a very busy summer organizing and attending so many and varied events, from a Motown night at the Maltings to The Maddingly Summer Ball, Aquafest riverside event to the Apple Festival, oh and lets not forget the Haddenham steam engine rally. All of which has brought in a huge amount of donations from the people of Ely and the surrounding area.

I would like to once again thank all those who have given so generously to Lisa’s fund we have now raised a total of £146,000 in the last six years. 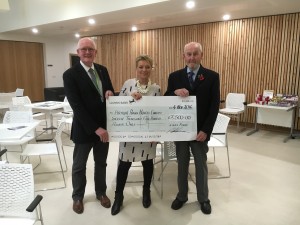